J. Richard "Dick" Steffy stood inside the limestone hall of the Crusader castle in Cyprus and looked at the wood fragments arrayed before him. They were old beyond belief. For more than two millennia they had remained on the sea floor, eaten by worms and soaking up seawater until they had the consistency of wet cardboard. There were some 6,000 pieces in all, and Steffy's job was to put them all back together in their original shape like some massive, ancient jigsaw puzzle.

He had volunteered for the job even though he had no qualifications for it. For twenty-five years he'd been an electrician in a small, land-locked town in Pennsylvania. He held no advanced degrees-his understanding of ships was entirely self-taught. Yet he would find himself half a world away from his home town, planning to reassemble a ship that last sailed during the reign of Alexander the Great, and he planned to do it using mathematical formulas and modeling techniques that he'd developed in his basement as a hobby.

The first person ever to reconstruct an ancient ship from its sunken fragments, Steffy said ships spoke to him. Steffy joined a team, including friend and fellow scholar George Bass, that laid a foundation for the field of nautical archaeology. Eventually moving to Texas A&M University, his lack of the usual academic credentials caused him to be initially viewed with skepticism by the university's administration. However, his impressive record of publications and his skilled teaching eventually led to his being named a full professor. During the next thirty years of study, reconstruction, and modeling of submerged wrecks, Steffy would win a prestigious MacArthur Foundation "genius" grant and would train most of the preeminent scholars in the emerging field of nautical archaeology.

In honor of Texas A&M University Emeritus Professor and MacArthur Foundation "Genius Grant" recipient, J. Richard Steffy, a scholarship is being established for graduate students at TAMU enrolled in the Nautical Archaeology Program. Mr. Steffy was one of the founding members of the NAP in 1976 and retired in 1990 after a distinguished career. Probably most-well known for his extensive and detailed work with the understanding and reconstruction of the Kyrenia hull remains, Dick also contributed significantly to numerous other high-profile projects including the Sea of Galilee boat, the Athlit ram, and the Herculaneum boat, just to name a few. Former students, friends of INA, and colleagues are encouraged to contribute to an endowment fund being established to fund the scholarship of up and coming nautical archaeologists in the name of one of the pioneers in the understanding of ancient ship construction. Please contact the INA offices at +01(979) 845-6694 or through email at info@discover.com for more details. 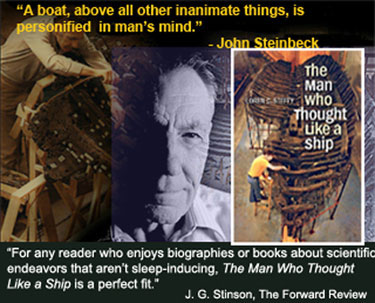 What readers are saying


"While the Archaeological subject and the exotic locale in the book is quite interesting, it is more of a background of how a man succeeded in finding his purpose in the grand scheme of things, not by the raw talent/exposure and easy exploitation by others for "fifteen minutes of fame" which seems to be the current "American Dream", but hard work stimulated by great passion for a subject, and with inner growth that spanned decades. Steffy was not out to make money, he was out to broaden our understanding of our past and he proved the right man at the right time in the right place...and he put himself there. You don't have to like ships to like this book. I give this book five stars for the quality of the writing and the originality of subject."