BP and the Reckless Pursuit of Profit

Watch the trailer for Drowning in Oil 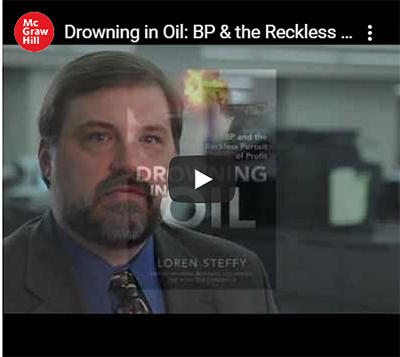 As night settled on April 20, 2010, a series of explosions rocked the Deepwater Horizon, the immense semisubmersible drilling platform leased by British Petroleum, located 40 miles off the Louisiana coast. The ensuing inferno claimed 11 lives and raged uncontained for three days, until its wreckage sank to a final resting place nearly a mile beneath the waves.

On the ocean floor, the unit's wellhead erupted. Over the next ten weeks, as repeated attempts to cap the geyser failed, an estimated 172 million gallons of oil - the equivalent of 15 Exxon Valdez spills - spewed into the Gulf of Mexico, eventually lapping up on beaches as far away as Florida.

Drowning in Oil, by award-winning business journalist Loren Steffy - considered by many to be the writer with the best access to the story - is an unprecedented and gripping narrative of this catastrophe and how BP's winner-take-all business culture made it all but inevitable.

Through never-before-published interviews with BP executives and employees, environmental experts, and oil industry insiders, Steffy takes us behind the scenes of 100 years of BP corporate history. Beginning with the conglomerate's early gambits in the Middle East to its recent ascent among energy titans, Steffy unearths the roots of the Gulf oil spill in the unwritten bargain between oil producers and consumers, whose insatiable appetites drive the search for new supplies faster, farther, and deeper. Beyond this, the Deepwater Horizon disaster was caused by BP's reckless cost-cutting in pursuit of profits, particularly under the guidance of its two most recent ex-CEOs, John Browne and Anthony Hayward.

Exhaustively researched and documented, Drowning in Oil is the first in-depth examination of how a lack of corporate responsibility and government oversight led to the biggest offshore oil spill in U.S. history. It is an objective, no-punches-pulled account of the energy industry, its environmental impact and the intense competition among stakeholders in today's oil markets. This book puts all the pieces together, offering a definitive account of BP's dangerous pursuit of outsized profits amid the grim reality of the world's ever-increasing demand for cheap oil.

"When an author uses a loaded word like 'reckless' in a book's title, the burden of proof is high. . . . Steffy meets the burden by demonstrating that corporate behemoth BP (formerly British Petroleum) could have prevented the 11 deaths on April 20, 2010, aboard the Deepwater Horizon. . . . The deaths and the gigantic oil spill following the sinking of Deepwater Horizon will surely become a landmark of corporate ineptness and greed for the remainder of human history, thanks in part to Steffy's remarkable account." San Antonio Express-News

"Steffy's book itself represents a heroic contribution to learning. His technical paragraphs are clear, even if some diagrams might have helped. His textual research is terrific, and the vignettes his interviews elicit from BP and Transocean operatives are funny, sad and telling in equal measure." James Woudhuysen, Spiked Review of Books

"Steffy has produced a fascinating, gripping, revealing account. . . . The book details events aboard the Deepwater Horizon in April of 2010 to start, but it digs deeper into what is revealed as a culture of cost-cutting boiling over within BP. Steffy documents years of incidents and poor management decisions, detailing the rise of key characters like John Browne and Tony Hayward alongside riveting outlines of horrifying events in Texas City and at other BP locations. . . . The book reads like fiction at times, with the author's heavily-detailed accounts of explosions and conversations creating vivid, nearly fantastical images. The tragic history of BP is all-too-real, though, as the lost lives and environmental damage certainly attest to.. . . Steffy is a thorough, straightforward author. His concerns largely lie with the loss of life and the general culture of cost-cutting of BP, painting an apt and terrifying picture of rampant, steady, costly neglect." Seattle Post Intelligencer

"Steffy provides valuable insight and crucial corporate context in explaining how so much oil ended up in the Gulf of Mexico." BusinessWeek

"[Steffy's] investigations reveal a corporate culture of cost-cutting initiatives that put profits ahead of workers' lives and the environment, with repeated safety violations and an abysmal accident history. . . . Steffy details how, in the context of BP's record, the disaster was just part of a pattern of poor decision making in the relentless pursuit by BP to become the largest and most profitable oil company in the world." Booklist

"Clearly written and well-researched, it's a useful probe behind the scenes of a major event for the general public and a cautionary tale for executives."  Globe and Mail 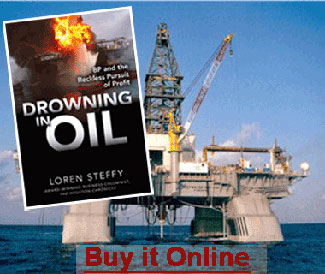